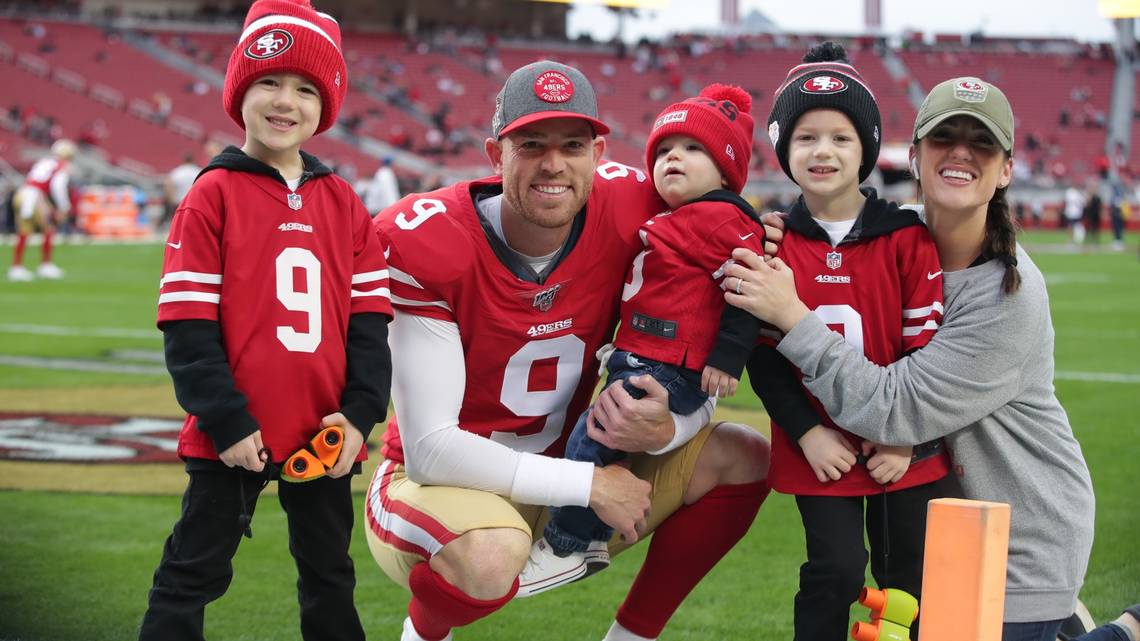 49ers kicker Robbie Gould is one of many NFL players trying to navigate an uncertain offseason that includes being stuck at home, home schooling children and preparing physically for the upcoming campaign.

It’s all a bit hectic, particularly because there’s no light at the end of the tunnel.

“Right now, the biggest problem for us is, when’s everything going to start back up?” Gould, 37, said in a phone interview from his home northwest of Chicago this week. “You’re normally training with a certain perspective to have yourself ready at certain stages of the spring and the summer — mini camps, training camp — and you just don’t know when that’s going to happen.”

The league this week announced it was delaying the start of the offseason conditioning programbecause of the ongoing COVID-19 pandemic that’s forced people to stay home. This week would have marked the normal start of conditioning programs for teams that hired new coaches like Carolina, Dallas, Cleveland, Washington and the New York Giants with all other teams, including the 49ers, starting next week.

Instead, the league and the NFLPA are working out ways to handle the offseason proceedings as all team facilities have been closed until further notice. It includes doing the three-day NFL Draft starting April 23 virtually with executives and decision-makers operating from their home offices.

The quarantine orders from state governments haven’t dramatically impacted offseason life for all players. Tight end George Kittle has been regularly working out in Nashville with his wife, Claire, which they’ve documented on social media. As has receiver Deebo Samuel, who’s been working out in his home state, South Carolina.

Gould has three children ranging from 1 to 6 years old, which has forced the veteran kicker to get creative when it comes to daily scheduling and his workouts.

Once Illinois announced its statewide lockdown last month, Gould built out a home gym in a storage area in his basement to complement his kicking work. He purchased a squat rack, free weights and free-motion cable machine. He does his morning workouts with a trainer virtually through video conference on an iPad, which has gone well given the unusual circumstances.

“The nice part is, I’ve been able to train the way that I need to,” he said. “It’s just a matter of finding the places to kick. But the nice part is, before I left (the Bay Area) ... I’ve had the ability to kind of pick up where I left off and what I wanted to do based on being in the backyard, having fun with my kids kicking out there, or having them shag for me.”

Gould doesn’t have goal posts at his house to kick through. Instead, he targets landmarks like trees. His backyard has some 60 yards to work with.

Perhaps the harder part is being a parent and dealing with home schooling. Fortunately for Gould, his wife is a former elementary school teacher who’s helped with much of the work with Gould’s oldest son, Griffin, 6, who will likely miss the last couple months of his kindergarten school year. Gould’s other son, Gavin, 4, is in preschool while Grayson will turn 2 later this year.

Gould said Griffin and Gavin partake in his morning workouts as their gym class. The rest of the day is typically a combination of home schooling, reading books, doing math, using the ABC Mouse app, and trying to find activities to keep the kids interested while having to follow directions, like baking. There’s usually a family walk in the afternoons, weather permitting, followed by dinner and Disney movies.

The good news is Gould has been given time with his family after spending much of the last three seasons away. He’s lived in a hotel near team headquarters since signing with San Francisco in 2017 while his family has stayed in their home outside Chicago.

“I’ve spent three of the last four years away from my family,” he said. “And for me that’s the most important thing. Whether it’s kicking, whether it’s going to a grocery store, whether it’s working out in the basement, those are things that I find to be able to spend time with them. And I think they enjoy it too.”

Another challenge for Gould has been trying to put what’s happening in perspective, including keeping the kids away from their friends.

“I think it was probably 10 days ago, they were like, ‘When’s spring break over?’ They don’t understand this whole COVID pandemic conversation,” Gould said.

“It’s trying to teach your kids what it’s about, why they can’t go to school probably for the entire year. Coming up with conversations to tell them what a pandemic is and why they can’t be getting out of their house and going to school and going to karate — these are all things that they have to get adjusted to too and it’s just about finding a routine.”

It remains unclear when the 49ers will be able to get all their players back at team headquarters. The most likely scenario would be training camp that starts at the end of July. Though it would take wide-ranging coronavirus testing before teams could safely reconvene. Testing has been hard to come by during the early stages of the pandemic and has been reserved only for those experience significant symptoms.

Whenever Gould and his teammates hit the field again, it will be without star defensive lineman DeForest Buckner, who was traded last month to the Indianapolis Colts for the No. 13 pick in the draft.

Buckner, a team captain and winner of the team MVP Bill Walsh Award in 2019, received a four-year extension worth up to $84 million with the Colts. San Francisco elected to trade Buckner rather than pay him while fellow defensive lineman Arik Armstead received a five-year, $85 million deal on the eve of his free agency.

Gould, who stayed away from the team last offseason before inking a four-year contract worth up to $19 million, understands Buckner’s situation is part of the business.