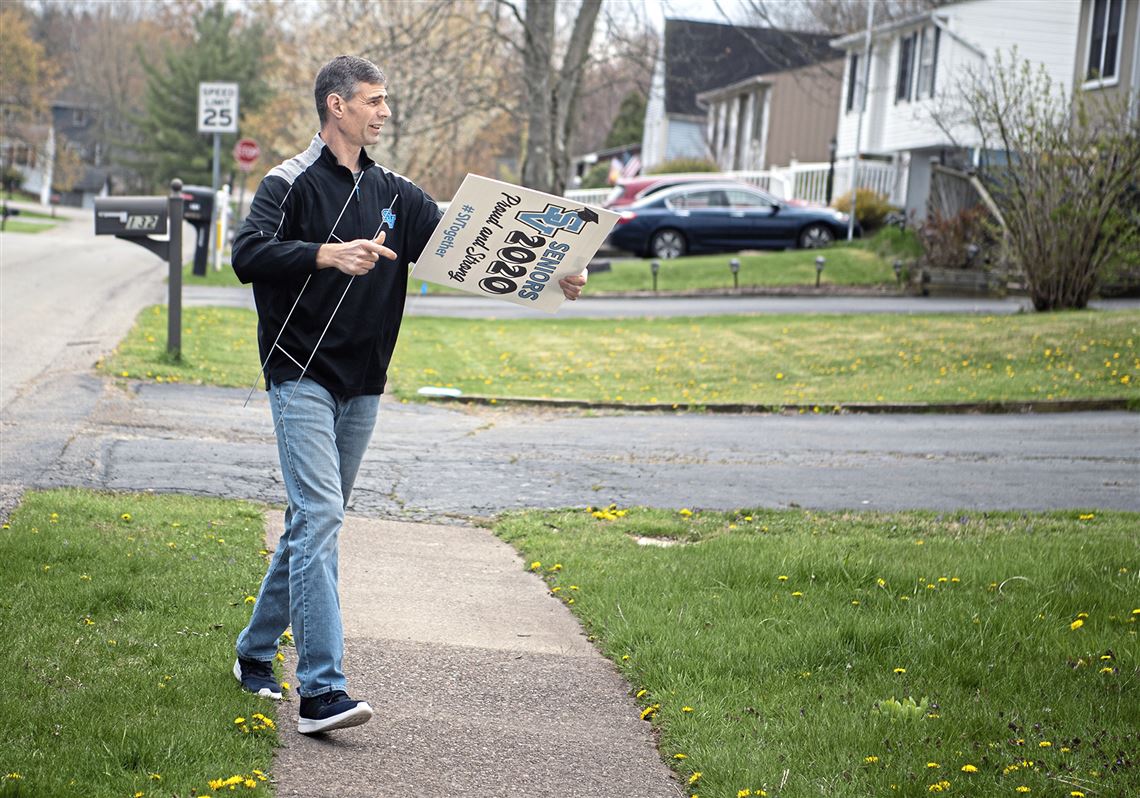 When Seneca Valley High School senior Matthew Link found out he wouldn’t be finishing his classes at the school, he was considerably disappointed. There are those he won’t get the chance to see again and those with whom he never got the chance to connect.

So seeing his principal, Bob Ceh, at his door Wednesday afternoon felt surreal to him.

Mr. Ceh wasn’t there to scold Mr. Link, however. Mr. Ceh was among several other teachers, administrators, school board members and members of the Seneca Valley Foundation who spent the afternoon driving around to seniors’ homes to drop off yard signs — about 600 of them — as a way to check in and try to lift their spirits.

The signs, which read “SV Seniors 2020 Proud and Strong #SVTogether” in the school’s colors, Columbia blue and black, were designed by Jonah Pontzius, who graduated from Seneca Valley in 2018.

“It just shows me that the school still cares about us. That they’re not just trying to push us off and get the online work done,” Mr. Link said.

Mr. Ceh stopped by Mr. Link’s house and three other homes to ask them how they’re doing and to let them know they haven’t been forgotten.

When the district announced on April 9 it would close its doors for the rest of the school year, Mr. Ceh knew how much the news would hurt his students — especially the seniors.

“There’s no parallel experience that any of us have had in the olden days,” Mr. Ceh said.

Most of the students he has talked to said they are planning on doing something special for graduation, but are waiting to hear what the school will do.

At one of Mr. Ceh’s stops, Sara Kelly, mother of senior Sean Kelly, said it was a great feeling seeing her son’s principal stop by.

“With all of this going on, we felt like we were lost,” Ms. Kelly said. “With everything being taken away, with graduation and social distancing, I thought that we were not going to be remembered.”

She said the experience has been difficult for Sean, who misses going to school and seeing his friends while working at the cafeteria as a part-time job.

Mr. Link said he is spending his days hanging out with his family, playing video games — and completing his online homework. To help get his mind off the situation, he and his brother have been drives around the neighborhood.

Dan McKosky, a video production teacher at the high school, was one of several teachers who spent the afternoon passing out signs. Every year, Mr. McKosky produces a senior tribute video for his students or those who worked in the community’s television station, SVTV.

Since it seems the video would be impossible to create now, Mr. McKosky said it was important to try to see as many students as he could.

“I wish I could have spent all day doing it,” Mr. McKosky said. “They were just really excited to talk, because I think they’re missing interaction from anyone at school, really.”

Stopping by to say hello has been helpful for Mr. McKosky as well.

“It’s good to see my students’ faces on Zoom, but nothing beats face to face. Even if it’s only for five or 10 minutes,” he said.

“I think it’s really hard with a really massive school district like this to show that there’s positivity and that there’s community because we’re all so spread out. But I think the district is doing a really nice thing bringing people together,” Mr. McKosky said.

Mr. Link said he misses goofing off with his friends at lunch time.

“Throughout my years at Seneca Valley, I’ve never had a time where I was really like, ‘I wish I was at another school district,’ ” Mr. Link said. “You can’t really find this in other places.”