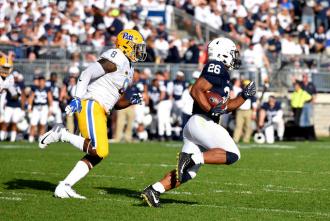 Thus far, the Nittany Lions have a pair of night games on the schedule. The Week 4 contest is a rematch of last year’s 41-14 Penn State victory at Beaver Stadium. Penn State has won three consecutive games in the series. The squad’s last visit to Kinnick Stadium was a 38-14 win back in 2012.

Despite a 33-14 pasting of Pitt, the Nittany Lions dropped to No. 5 in both the AP poll and USA Today Coaches poll. Oklahoma and USC moved into the top 4 after beating ranked opponents. Ohio State dropped several spots after losing to Oklahoma in Columbus. Penn State is now the highest ranked team in the Big Ten. Michigan and Wisconsin are also ranked in the top 10.

For Penn State running back Saquon Barkley, his Week 2 effort was good – just not good enough when it comes to the Heisman Trophy. The Nittany Lions’ star running back had 88 yards on just 14 carries. That’s definitely a solid day at the office, but it won’t make Heisman voters sit up and take notice. Barkley did score twice in the game, including a pretty 46-yard catch and run right down the seam against the stunned Panthers. Barkley finished with 183 all-purpose yards.

He will need – and likely have – a big week against Georgia State. He will really get a chance to show off for the nation on Sept. 23 under the lights at Kinnick Stadium in Iowa City.

He is, of course, known for the longest punt return in Super Bowl history. In Super Bowl L, he played for the Broncos and returned a punt 61 yards against the Carolina Panthers. He finishes his NFL career with 844 yards on 79 receptions and a pair of TDs.