How Brandon Noble is Helping Others Amidst the Covid-19 Outbreak 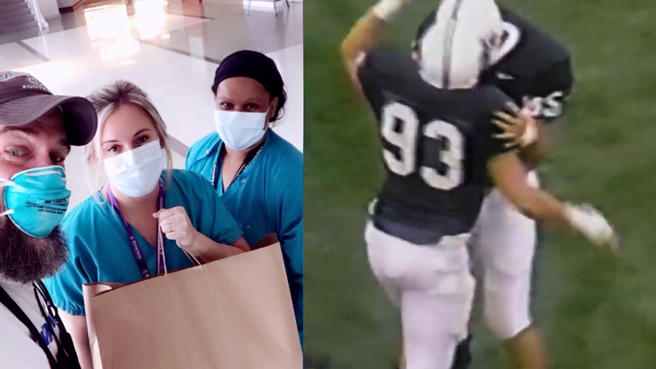 Former Penn State and NFL defensive tackle Brandon Noble is taking the lessons he learned during his football career and applying them to the fight against the coronavirus. Noble, who owns the Bright Spot Cafe in Exton, Pennsylvania, along with his partners Tommy and Shannon Brower, is delivering meals to healthcare workers at various hospitals.

The idea originated from a phone call and took on a life of its own.

"A friend of Tommy called and asked if we could put together a lunch for the nurses at Paoli Hospital," Noble said in an interview Monday with NBC Sports Philadelphia's John Clark. "This guy had a friend who worked there and he just wanted to send them a meal. So we did it, we took it down there and we saw the appreciation from the staff at the hospital that they had a hot meal individually packaged and rolled up to the door for them.

"You can just see it in their eyes because everyone is obviously wearing masks now. It kind of snowballed from there, people are calling us, reaching out to us and they're asking to buy meals for different hospitals and wings of different departments. It's really cool."

Noble and his partners have delivered about 2,000 meals over the last two weeks. He's urging people to get involved and donate money and meals by visiting his restaurant's website — brightspotexton.com. The restaurant is matching all donations in an effort to support and feed as many healthcare workers as possible.

"Playing football for as long as I did, I've had plenty of surgeries, I've had the health issues, I've been in the hospital," Noble said. "I understand how important these people are and right now they're under a lot of stress. There's a lot going on, they're laying it on the line every day for the rest of us. So going in and helping them out, absolutely it feels good. One thing about this country, the people here, we take care of each other."

Noble pointed to one health scare in particular from his playing career that greatly impacted his view of doctors, nurses and other healthcare workers.

"I was one of the first guys in the NFL to get MRSA back in 2004," Noble said. "I had a routine operation and I woke up a few days later and I had this really bad hot spot in my knee and it kind of escalated from there. I ended up being unconscious in my living room during my daughter's 2nd birthday party. My mother-in-law is a nurse and she told my wife to take me to the hospital. They rolled me into the emergency room and the doctors told us if we had waited another 12 hours I would have lost my leg and I might have died.

"I spent 10 days in the hospital getting taken care of. I was a professional athlete, a football player, 6-foot-2 and 320 pounds and I couldn't walk without help. Those people kept me alive. So I have a tremendous amount of respect for them and what they do. They're taking care of people who are scared, who are hurt, who are in a bit of an unknown situation right now."

Noble lives in Chester Springs and is the defensive coordinator at Downingtown East High School. He's teaching his players the same lessons about football he learned long ago, lessons that led him to take action during these uncertain times.

"Football is one of those great places where there are people from all over, from all socioeconomic backgrounds, all sorts of family backgrounds, different geographic locations," Noble said. "You're all thrown into this room and you're told that you're going to win or lose depending on the guy next to you. How can you help that guy? How can you be there when it's your turn to help?