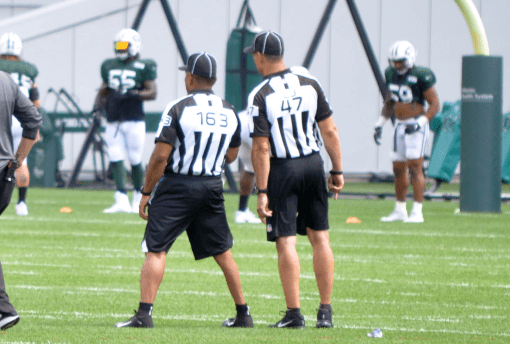 6 officials join the NFL officiating roster for the 2019 season

Hawkshaw most recently worked as a side judge in the Canadian Football League since 2005, and is now the fifth active NFL official with experience officiating in the CFL, joining Bill Vinovich, Gary Cavaletto, Tony Michalek, and Boris Cheek, who all worked when the CFL played games in the U.S. (This appears to be the first NFL official hired directly from the CFL.) Hawkshaw has worked in all three preseasons of the NFL-CFL officiating partnership as a deep wing official on NFL crews. He was the side judge for the 2017 Grey Cup.

Jones, from the Pac-12 Conference, and Killens, from the American Athletic Conference, are former NFL players, become the third and fourth active NFL officials to have NFL playing experience along with Steve Freeman and Phil McKinnely. Jones played as a defensive back for the Cowboys, Dolphins, Broncos, and Patriots from 2004 to 2011 (video) and was active, but did not play in, Super Bowl XLVI. Killens was a linebacker for the Oilers/Titans, 49ers, and Seahawks from 1996 to 2002. Killens also played in Super Bowl XXXIV (video).

All five U.S.-based new hires were officials in the inaugural season of the now-defunct Alliance of American Football.