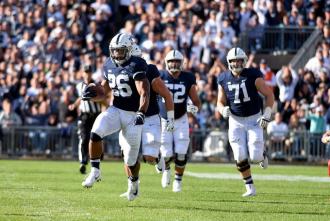 As Penn State readies for the Fiesta Bowl on Dec. 30, the accolades continue to roll in for running back Saquon Barkley. Barkley was selected as an Associated Press first-team All-American. He was selected as an “all-purpose player.” The first-team running backs chosen were Stanford’s Bryce Love and San Diego State’s Rashaad Penny. Wisconsin’s Jonathan Taylor and Auburn’s Kerryon Johnson were second-teamers, while Southern California’s Ronald Jones and Florida Atlantic’s Devin Singletary were named to the third team.