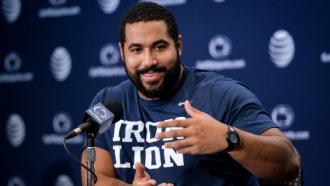 The Homecoming Executive Committee announced Friday via social media that Urschel has been tabbed for the honor. Urschel, a 2013 Penn State alumnus, is now a mathematics doctoral student at MIT. According to a Homecoming news release, Urschel is the “embodiment of a true student-athlete with the spirit of a Nittany Lion.

“Penn State was a place where I not only found my love of mathematics but grew into the man I am today,” Urschel said in the release. “If it wasn't for Penn State, I don't know where I would be today.”

Being named grand marshal certainly adds to Urschel’s impressive resume. In 2013, he was awarded the William J. Campbell trophy — or the “academic Heisman,” according to the release.

According to the news release, Urschel was selected through a highly competitive selection process, with the Executive Committee sifting through “notable” alumni who could “instill pride throughout the Penn State community.”

In addition to his time as a Nittany Lion, Urschel played for the NFL’s Baltimore Ravens before moving on to MIT.

“I believe John reflects the hard work and dedication it takes to follow and achieve your dreams,” Homecoming Alumni Relations Director Emily Heere said in the news release. “I cannot even fathom the time and dedication it would take to achieve these goals, but it goes to show that when you are truly passionate about something and willing to put in the work you can do anything.”

Urschel will be featured in the Homecoming parade and at the football game against Rutgers on Saturday, Nov. 11. Students will have an opportunity to meet Urschel during an ice cream social from 1 to 4 p.m. on Friday, Nov. 10 in the Hintz Family Alumni Center.